From Project SEED to Capitol Hill 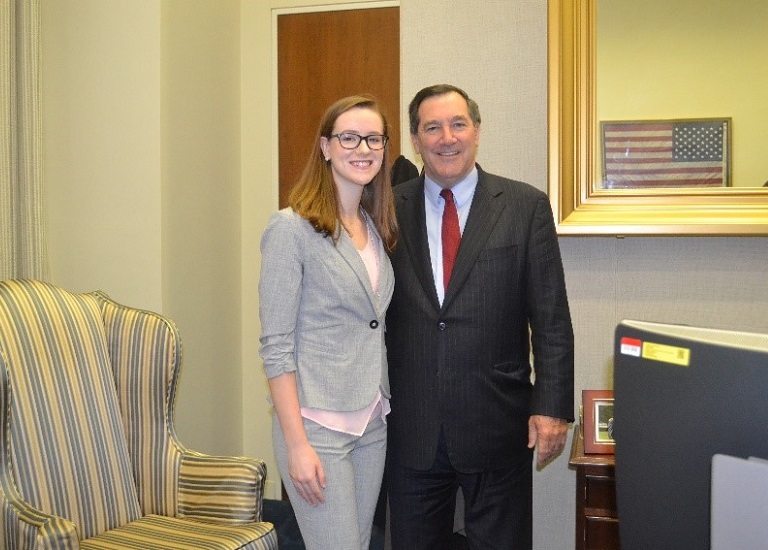 Dana K. Oakes and Sen. Joe Donnelly
Senior biology-neuroscience double major Dana K. Oakes began independent, faculty-mentored research on retinal development using human pluripotent stem cells in the laboratory of Dr. Jason Meyer in the Department of Biology, Purdue School of Science at IUPUI, through Project SEED in summer 2013. Since then she has been involved with research continuously, including in the Biology Freshman Work Program. With funding through the Life-Health Sciences Institute and the IUPUI Center for Research and Learning’s (CRL) Undergraduate Research Opportunities Program (UROP), she has been working in the laboratory of Dr. Imranul Alam in the Division of Endocrinology, Indiana University School of Medicine. In fall 2016, she presented to the American Society for Bone and Mineral Research on autosomal dominant osteopetrosis type II, a rare bone-density disease, for which Dr. Alam’s was the first laboratory in the world to develop a mouse model. With her UROP grant, Dana studied a potential drug target for glucocorticoid-induced osteoporosis, the most common form, garnering CRL’s 2017 Bowling-Jones-Russo Memorial Undergraduate Research Award.

At the fall 2016 UROP orientation session, CRL interim executive director Dr. Dominique M. Galli announced the call for proposals for the Council on Undergraduate Research’s (CUR) annual Posters on the Hill symposium in Washington, D.C. http://www.cur.org/conferences_and_events/student_events/posters_on_the_hill_2017/ Dana reflects, “There are all these things I’ve gotten to do because of CRL!” At Dr. Alam’s urging, she submitted two abstracts to CUR, and he mentored her in shaping them for a broader audience. During the two-day conference, she discussed her research with Senators Todd Young and Joe Donnelly, as well as with representatives from the offices of Congresswoman Susan W. Brooks and Congressman André Carson. Dana also spoke with interns, who tended to be a little older than the students, and with other health-sciences poster presenters. 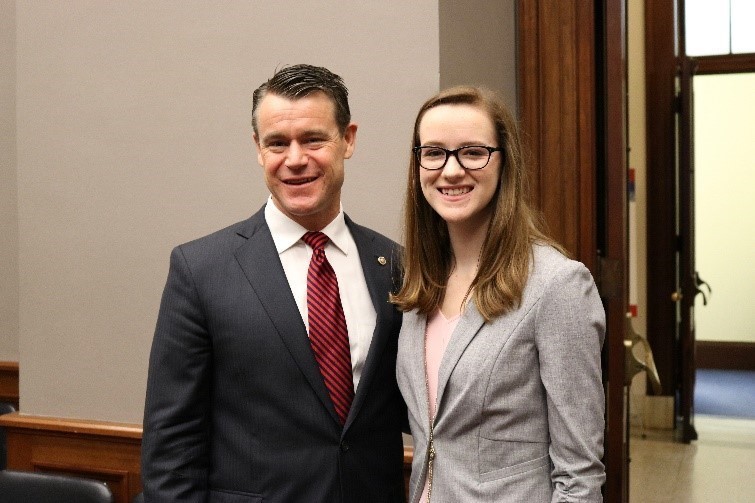 Dana K. Oakes and Sen. Todd Young
The most thought-provoking question she received during Posters on the Hill actually came from an age-peer intern with a political-science background: "Why is funding from NIH (National Institutes of Health) important? How does that affect you?” Dana explained that such federal funding allows labs to do research and makes places for students to learn hands-on, to translate research real-world, data-driven solutions. Although she was a bit nervous about being by herself in our nation’s capital and about meeting the senators, overall, it was a relaxed environment. "I had a good time. I learned a lot," she recalls, adding, "I learned more about myself than I thought I would. I learned that civic engagement is more important that I’d thought." An aspiring physician-scientist, Oakes relates, "I visited the NIH clinical center and fell in love with it." As a result, "I applied to medical schools in the D.C. area." Asked whether she would recommend Posters on the Hill to others, she replied, "Absolutely! And not just science students." Gratefully, she acknowledged, "I wouldn’t have been able to go without CRL’s help."
Back to top of page